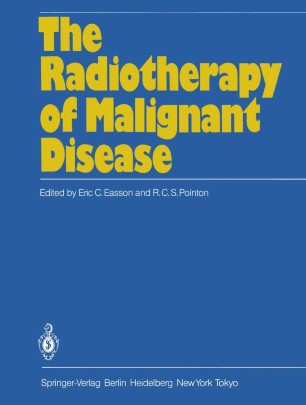 The Radiotherapy of Malignant Disease

Radiotherapy or radiation therapeutics, as the name suggests, is a branch of general therapeutics. In this case the therapeutic agent is ionising radiation which induces specific and predictable biological changes. Radiotherapy is sometimes described as therapeutic radiology because historically the earliest X-ray machines were used both for diagnostic and therapeutic purposes. Diagnostic radiology has since become a very complex and time-consuming speciality requiring the undivided care and attention of the diagnostic radiologist. Similarly, radiotherapy now embraces both X-ray beams and the radiations from radium and various artificial radium substitutes. This too requires the full-time attention of the radiotherapist. In recent years radiotherapy has sometimes been described as radiotherapeutic oncology, to indicate the involvement of the radiotherapist in oncological management and indeed in all aspects of oncology from prevention and early detection to the treatment, after-care, and (for those who need it) terminal care of the patient. The radiotherapist, by total commitment to the cancer problem, is in truth the epitome of the oncologist. In the same way as the medical physician or internist requires a proper understanding of the pharmacology of the therapeutic agents he or she employs-the nature, metabolic biochemistry, and biological effects of any administered drug-so also the radiotherapist needs to understand the nature, biological effects, and therapeutic potentialities of ionising radiations. The radiotherapist's "pharmacology" involves an understanding of the relevant physics and radiobiology.