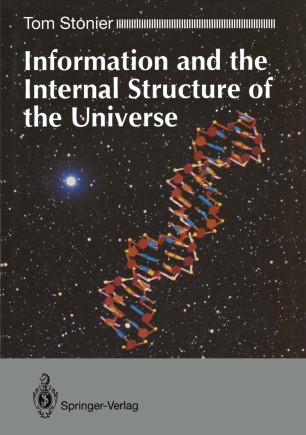 Information and the Internal Structure of the Universe

An Exploration into Information Physics

Not so if the book has been translated into Arabic. Now the reader can discern no meaning in the letters. The text conveys almost no information to the reader, yet the linguistic informa­ tion contained by the book is virtually the same as in the English original. The reader, familiar with books will still recognise two things, however: First, that the book is a book. Second, that the squiggles on the page represent a pattern of abstractions which probably makes sense to someone who understands the mean­ ing of those squiggles. Therefore, the book as such, will still have some meaning for the English reader, even if the content of the text has none. Let us go to a more extreme case. Not a book, but a stone, or a rock with engravings in an ancient language no longer under­ stood by anyone alive. Does such a stone not contain human information even if it is not decipherable? Suppose at some point in the future, basic knowledge about linguistics and clever computer aids allow us to decipher it? Or suppose someone discovers the equivalent of a Rosetta stone which allows us to translate it into a known language, and then into English? Can one really say that the stone contained no information prior to translation? It is possible to argue that the stone, prior to deciphering contained only latent information.