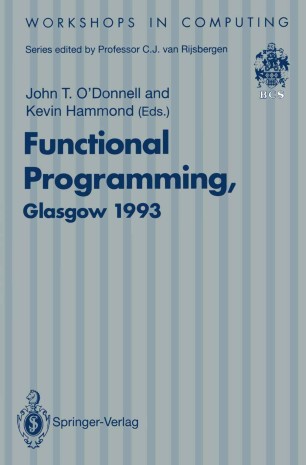 The Functional Programming Group at the University of Glasgow was started in 1986 by John Hughes and Mary Sheeran. Since then it has grown in size and strength, becoming one of the largest computing science research groups at Glasgow and earning an international reputation. The first Glasgow Functional Programming Workshop was organised in the summer of 1988. Its purpose was threefold: to provide a snapshot of all the research going on within the group, to share research ideas between Glaswegians and colleagues in the U.K. and abroad, and to introduce research students to the art of writing and presenting papers at a semi-formal (but still local and friendly) conference. The success of the first workshop has led to an annual series: Rothesay (1988), Fraserburgh (1989), Ullapool (1990). Portree (1991), Ayr (1992), and the workshop reported in these proceedings: Ayr (1993). Most participants wrote a paper that appeared in the draft proceedings (distributed at the workshop), and each draft paper was presented by one of the authors. The papers were all refereed by several other participants at the workshop, both internal and external, and the programme committee selected papers for these proceedings. Most papers have been revised twice, based firstly on feedback at the workshop, and secondly using the referee reports.