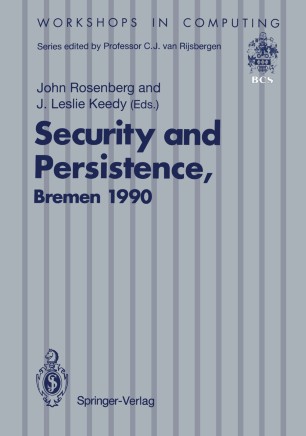 Proceedings of the International Workshop on Computer Architectures to Support Security and Persistence of Information 8–11 May 1990, Bremen, West Germany

During a short visit to Bremen in December 1989 John Rosenberg had several discussions with me about computer architecture. Although we had previously worked together for more than a decade in Australia we had not seen each other for over a year, following my move to Bremen in 1988. Meanwhile John was spending a year on study leave at the University of St. Andrews in Scotland with Professor Ron Morrison and his persistent programming research group. From our conversations it was quite clear that John was having a most fruitful time in St. Andrews and was gaining valuable new insights into the world of persistent programming. He was very keen to explore the significance of these insights for the MONADS Project, which we had been jOintly directing since the early 1980s. MONADS was not about persistent programming. In fact it had quite different origins, in the areas of software engineering and information protection. In an earlier stage of the project our ideas on these themes had led us into the world of computer architecture and even hardware deSign, in our attempts to provide an efficient base machine for our software ideas. The most important practical result of this phase of the project had been the development of the MONADS-PC, a mini­ computer which would be better compared with say a V tv< 11/750 than with a personal computer, despite its unfortunate name.