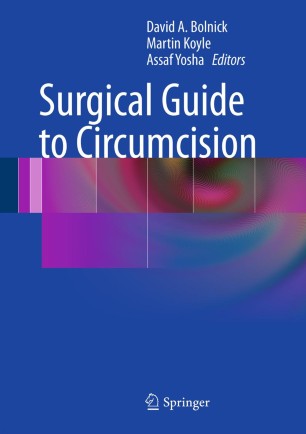 Surgical Guide to Circumcision is a compendium of the who, what, where, why, and most importantly, the how of circumcision. Given that one third of the world’s males have undergone this most ancient of surgical procedures, a contemporary resource on the subject is in order.

Most circumcisions are elective with no acute medical necessity; that is, most are done for cultural reasons. Thus, in addition to being a standard surgical guide for those who perform circumcision, this book is an anthology of circumcision, from its prehistoric roots to its present day admixture of religion, culture, and medicine.

Surgical Guide to Circumcision is a fully illustrated, step-by-step guide to the most common techniques of circumcision and addresses aspects such as informed consent, religious and cultural sensitivities, pre-exam, post-care, pain control, and prevention and management of potential complications.

Written by experts in the field, Surgical Guide to Circumcision will appeal to family physicians, pediatricians, obstetricians, midwives, nurses, urologists, and anyone with a general interest in circumcision.

Dr. Bolnick is an amalgam of scholar, scientist, technology design guru, media producer, and photographer. Bolnick's contributions have been recognized by numerous achievement awards including 7 US Patents (most recent , March 2010), United Nations Outstanding Achievement Award, US Vice President Gore's Hammer Award, 7 Telly Awards, California Governor’s Media Access Award, Easter Seals’ Special EDI Award, 2 Aurora Awards,  AEGIS Award of Excellence, and many others. From 1973, Bolnick's early research interest was in coronary artery flow dynamics followed by vision and retinal physiology. In 1984 he completed his PhD in physiology with a focus on photoreceptor physiology at the University of California - Davis. From 1984 to 1988 Dr. Bolnick undertook post-doctoral studies in photoreceptor membrane biophysics at the University of California - San Francisco. Bolnick switched from basic research to computers/software and in 1990 took a position at Microsoft for the following ten years. There he designed software, help redesigned software for use by people with disabilities, served on federal committees on accessible technology compliance, and testified before the US Senate, the US House of Representatives and the Federal Communications Commission on accessible technology for people with disabilities. Currently, Dr. Bolnick is co-owner of a small media production company and is director of its medical media division, MedicoLens.com.  In addition, he has served the Pacific Northwest Jewish community as a certified mohel (Jewish ritual circumciser) for nearly a quarter century.  Dr. Bolnick is an affiliate faculty in the Department of Urology, University of Washington – Seattle.

Martin Koyle is a pediatric urologist, currently living in Toronto, Canada. There he serves as Professor of Surgery and Program Director, Pediatric Urology at the University of Toronto and the Hospital for Sick Children. After growing up in Canada where he received his medical degree (1976), he trained in surgery at Los Angeles County- USC Medical Center and in urology at Harvard Program centered at the Brigham and Women’s Hospital in Boston (1980-1984). He then advanced through academic posts at UCLA (1984-1989), University of Colorado and The Children’s Hospital (1989-2008), and the University of Washington and Seattle Children’s Hospital (2008-2011). During his almost 3 decades in academic urology, Dr. Koyle has been known for his multiple innovations and contributions to the fields of pediatric urology and transplantation. He was the first to publish on laparoscopic nephrectomy in infants, introduced the MACE (Malone Antegrade Continence Enema), the Bianchi technique (single incision orchidopexy) and the Bracka hypospadias repair to North America, and also one of the first surgeons to gain experience in the tubularized incised urethral plate hypospadias repair (Snodgrass technique) and to demonstrate its applicability beyond North America to Europe and Asia. He invented and patented the Koyle stent (Cook Inc), which is used around the world for hypospadias and urethral surgery. To date, he has contributed over 200 major publications and chapters to the literature. Recently he has been a co-editor to the textbooks, "Pediatric Urology- Surgical Complications and Management" and “Guide to Pediatric Urology and Surgery in Clinical Practice”. He is Associate Editor of Dialogues in Pediatric Urology and serves on the editorial boards of Pediatric Surgery International and the Journal of Pediatric Urology. Dr Koyle is past president of the Rocky Mountain Urology Society, the Society for Pediatric Urology, and the American Association of Pediatric Urologists. He is a Fellow of the American College of Surgeons, Fellow of the American Academy of Pediatrics, and Fellow of the Society for Pediatric Urology. In January, 2010, he was elected “on merit” as Fellow of the Royal College of Surgeons for his contributions to urology, pediatric surgery, and pediatric urology in the internationally, and in particular in the British Isles.

Dr. Assaf Yosha is known for his emphasis on patient and community centered care. He is a family physician at the Woodward Health Center, a Community Health Center that is part of the Anthony Jordan Health Center in Rochester, NY.  He is skilled in operative obstetrics and cares for common high risk perinatal conditions.  His focus throughout his career has been to provide inner-city underserved residents access to quality healthcare.  Dr. Yosha attended Albany Medical College and in 2005 completed his Family Medicine training at NY-Presbyterian-Columbia in New York City.  He then spent a year working in tandem with his wife in rural New Zealand and at Indian Health Service facilities in America.  In 2007 Dr. Yosha completed an Obstetrics Fellowship training program for family physicians in Seattle, WA where he established a circumcision clinic which included resident physician training.   Now, as a Senior Instructor at the University of Rochester, in the Highland Family Medicine Department, Dr. Yosha teaches residents in the three common circumcision techniques.  Besides good technique and cosmetic outcome, he is always aiming to perform and teach a painless procedure with minimal anxiety to the parents.  Dr. Yosha also serves the greater Rochester region as a mohel to reform and conservative families.  In his spare time he enjoys running, watching films, and spending time with his wife and young daughters.

“This textbook assembles exhaustive surgical information and provides the reader with a wide description of all non-medical aspects surrounding circumcision. Each chapter is well illustrated and most are completed with an editor’s note. This original textbook is worthy of the attention of urologists and people involved in religious rites.” (European Urology Today, Vol. 25 (5), October-November, 2013)

“The authors of this book address the various historical and ethical aspects and describe the various technical methods used in male and female circumcision. … Reading this comprehensive review should serve to health care, legal and religious personnel to understand better the facts and problematic of this topic.” (Pediatric Endocrinology Reviews (PER), Vol. 10 (2), January, 2013)
Buy options