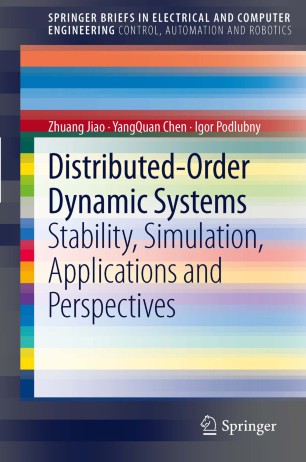 Distributed-order differential equations, a generalization of fractional calculus, are of increasing importance in many fields of science and engineering from the behaviour of complex dielectric media to the modelling of nonlinear systems.
This Brief will broaden the toolbox available to researchers interested in modeling, analysis, control and filtering. It contains contextual material outlining the progression from integer-order, through fractional-order to distributed-order systems. Stability issues are addressed with graphical and numerical results highlighting the fundamental differences between constant-, integer-, and distributed-order treatments. The power of the distributed-order model is demonstrated with work on the stability of noncommensurate-order linear time-invariant systems. Generic applications of the distributed-order operator follow: signal processing and viscoelastic damping of a mass–spring set up.
A new general approach to discretization of distributed-order derivatives and integrals is described. The Brief is rounded out with a consideration of likely future research and applications and with a number of MATLAB® codes to reduce repetitive coding tasks and encourage new workers in distributed-order systems.