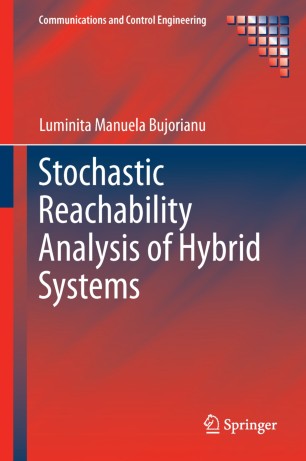 Stochastic reachability analysis (SRA) is a method of analyzing the behavior of control systems which mix discrete and continuous dynamics. For probabilistic discrete systems it has been shown to be a practical verification method but for stochastic hybrid systems it can be rather more. As a verification technique SRA can assess the safety and performance of, for example, autonomous systems, robot and aircraft path planning and multi-agent coordination but it can also be used for the adaptive control of such systems.

·        stochastic reachability as an optimal stopping problem; and

The book is rounded off by an appendix providing mathematical underpinning on subjects such as ordinary differential equations, probabilistic measure theory and stochastic modeling, which will help the non-expert-mathematician to appreciate the text.

Stochastic Reachability Analysis of Hybrid Systems characterizes a highly interdisciplinary area of research and is consequently of significant interest to academic researchers and graduate students from a variety of backgrounds in control engineering, applied mathematics and computer science.

Between June 2002 and January 2005, Doctor Bujorianu was a research associate in the Control Group, at the Department of Engineering at the University of Cambridge. After this appointment she remained in the Department as a research visitor for six months. During her appointment at Cambridge, she was involved in two European projects on hybrid systems: the IST-2001-38314 project COLUMBUS: “Design of Embedded Controllers for Safety Critical Systems” (partners: INRIA, University of Berkeley, PARADES (Rome), etc. http www.columbus.gr); and the IST-2001-32460 project HYBRIDGE: “Distributed Control and Stochastic Analysis of Hybrid Systems Supporting Safety Critical Real-Time Systems Design” (partners: National Aerospace Laboratory-NLR Amsterdam, BAE UK, Eurocontrol, AEA Technology, CENA, etc. http: www.nlr.nl/public/hosted-sites/hybridge) From November 2005 to June 2008 Doctor Bujorianu was a Research Associate with the Formal Methods and Tools Group at the Faculty of Mathematics and Computer Science, University of Twente, the Netherlands. Her research was funded by the NOW project AiSHA “Abstraction in Stochastic and Hybrid Process Algebra”. During her appointment with University of Twente, she was also involved in the German-Dutch project VOSS. Since June 2008 Manuela Bujorianu has been a Research Associate with the Centre for Interdisciplinary Computational and Dynamical Analysis (CICADA) at the University of Manchester in the UK.

“The author presents recent developments in the hybrid stochastic modeling for the analysis of embedded systems. The book starts with a smooth introduction into the problems related to Markovian models. The author defines and characterizes discrete space and continuous space Markov models. … The book is appended by description of some mathematical standard tools that makes it self-contained.” (A. Świerniak, Zentralblatt MATH, Vol. 1245, 2012)