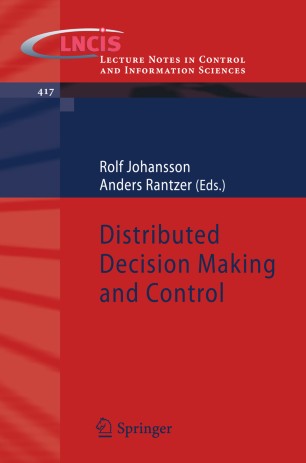 Distributed Decision Making and Control is a mathematical treatment of relevant problems in distributed control, decision and multiagent systems, The research reported was prompted by the recent rapid development in large-scale networked and embedded systems and communications. One of the main reasons for the growing complexity in such systems is the dynamics introduced by computation and communication delays. Reliability, predictability, and efficient utilization of processing power and network resources are central issues and the new theory and design methods presented here are needed to analyze and optimize the complex interactions that arise between controllers, plants and networks. The text also helps to meet requirements arising from industrial practice for a more systematic approach to the design of distributed control structures and corresponding information interfaces Theory for coordination of many different control units is closely related to economics and game theory network uses being dictated by congestion-based pricing of a given pathway. The text extends existing methods which represent pricing mechanisms as Lagrange multipliers to distributed optimization in a dynamic setting. In Distributed Decision Making and Control, the main theme is distributed decision making and control with contributions to a general theory and methodology for control of complex engineering systems in engineering, economics and logistics. This includes scalable methods and tools for modeling, analysis and control synthesis, as well as reliable implementations using networked embedded systems. Academic researchers and graduate students in control science, system theory, and mathematical economics and logistics will find mcu to interest them in this collection, first presented orally by the contributors during a sequence of workshops organized in Spring 2010 by the Lund Center for Control of Complex Engineering Systems, a Linnaeus Center at Lund University, Sweden.>