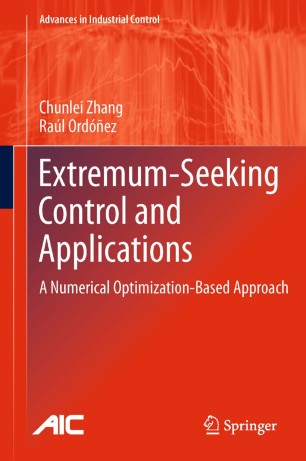 Extremum seeking control tracks a varying maximum or minimum in a performance function such as a cost. It attempts to determine the optimal performance of a control system as it operates, thereby reducing downtime and the need for system analysis.

Extremum Seeking Control and Applications is divided into two parts. In the first, the authors review existing analog optimization based extremum seeking control including gradient, perturbation and sliding mode based control designs. They then propose a novel numerical optimization based extremum seeking control based on optimization algorithms and state regulation. This control design is developed for simple linear time-invariant systems and then extended for a class of feedback linearizable nonlinear systems.

The two main optimization algorithms – line search and trust region methods – are analyzed for robustness. Finite-time and asymptotic state regulators are put forward for linear and nonlinear systems respectively. Further design flexibility is achieved using the robustness results of the optimization algorithms and the asymptotic state regulator by which existing nonlinear adaptive control techniques can be introduced for robust design. The approach used is easier to implement than those that use perturbation based extremum seeking control, and tends to display a high level of robustness.

The second part of the book deals with a variety of applications of extremum seeking control:

Extremum Seeking Control and Applications will interest academics and graduate students working in control, and industrial practitioners from a variety of backgrounds: systems, automotive, aerospace, communications, semiconductor and chemical engineering.

“The monograph is divided into two parts. In the first, the authors review existing analog-optimization-based ESC … . The second part of the book deals with applications of ESC … . The book will be of benefit to graduate students persuing their degrees in applied and industrial mathematics, as well as to researchers and engineers who may encounter optimal control methods in their work.” (Mikhail Yu Kokurin, Zentralblatt MATH, Vol. 1255, 2013)
Buy options