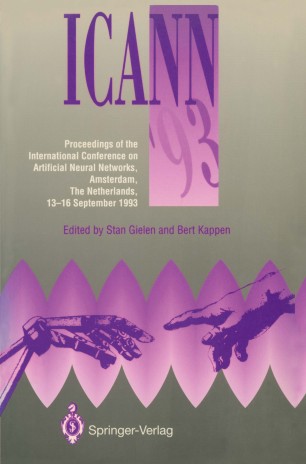 Proceedings of the International Conference on Artificial Neural Networks Amsterdam, The Netherlands 13–16 September 1993

This book contains the proceedings of the International Confer­ ence on Artificial Neural Networks which was held between September 13 and 16 in Amsterdam. It is the third in a series which started two years ago in Helsinki and which last year took place in Brighton. Thanks to the European Neural Network Society, ICANN has emerged as the leading conference on neural networks in Europe. Neural networks is a field of research which has enjoyed a rapid expansion and great popularity in both the academic and industrial research communities. The field is motivated by the commonly held belief that applications in the fields of artificial intelligence and robotics will benefit from a good understanding of the neural information processing properties that underlie human intelligence. Essential aspects of neural information processing are highly parallel execution of com­ putation, integration of memory and process, and robustness against fluctuations. It is believed that intelligent skills, such as perception, motion and cognition, can be easier realized in neuro-computers than in a conventional computing paradigm. This requires active research in neurobiology to extract com­ putational principles from experimental neurobiological find­ ings, in physics and mathematics to study the relation between architecture and function in neural networks, and in cognitive science to study higher brain functions, such as language and reasoning. Neural networks technology has already lead to practical methods that solve real problems in a wide area of industrial applications. The clusters on robotics and applications contain sessions on various sub-topics in these fields.