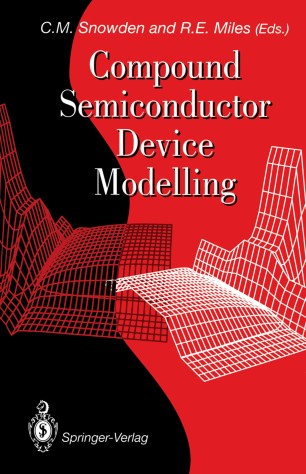 Compound semiconductor devices form the foundation of solid-state microwave and optoelectronic technologies used in many modern communication systems. In common with their low frequency counterparts, these devices are often represented using equivalent circuit models, but it is often necessary to resort to physical models in order to gain insight into the detailed operation of compound semiconductor devices. Many of the earliest physical models were indeed developed to understand the 'unusual' phenomena which occur at high frequencies. Such was the case with the Gunn and IMPATI diodes, which led to an increased interest in using numerical simulation methods. Contemporary devices often have feature sizes so small that they no longer operate within the familiar traditional framework, and hot electron or even quantum­ mechanical models are required. The need for accurate and efficient models suitable for computer aided design has increased with the demand for a wider range of integrated devices for operation at microwave, millimetre and optical frequencies. The apparent complexity of equivalent circuit and physics-based models distinguishes high frequency devices from their low frequency counterparts . . Over the past twenty years a wide range of modelling techniques have emerged suitable for describing the operation of compound semiconductor devices. This book brings together for the first time the most popular techniques in everyday use by engineers and scientists. The book specifically addresses the requirements and techniques suitable for modelling GaAs, InP. ternary and quaternary semiconductor devices found in modern technology.