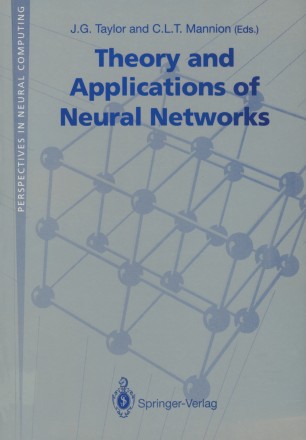 Theory and Applications of Neural Networks

Part of the Perspectives in Neural Computing book series (PERSPECT.NEURAL)

This volume contains the papers from the first British Neural Network Society meeting held at Queen Elizabeth Hall, King's College, London on 18--20 April 1990. The meeting was sponsored by the London Mathemati­ cal Society. The papers include introductory tutorial lectures, invited, and contributed papers. The invited contributions were given by experts from the United States, Finland, Denmark, Germany and the United Kingdom. The majority of the contributed papers came from workers in the United Kingdom. The first day was devoted to tutorials. Professor Stephen Grossberg was a guest speaker on the first day giving a thorough introduction to his Adaptive Resonance Theory of neural networks. Subsequent tutorials on the first day covered dynamical systems and neural networks, realistic neural modelling, pattern recognition using neural networks, and a review of hardware for neural network simulations. The contributed papers, given on the second day, demonstrated the breadth of interests of workers in the field. They covered topics in pattern recognition, multi-layer feedforward neural networks, network dynamics, memory and learning. The ordering of the papers in this volume is as they were given at the meeting. On the final day talks were given by Professor Kohonen (on self organising maps), Professor Kurten (on the dynamics of random and structured nets) and Professor Cotterill (on modelling the visual cortex). Dr A. Mayes presented a paper on various models for amnesia. The editors have taken the opportunity to include a paper of their own which was not presented at the meeting.