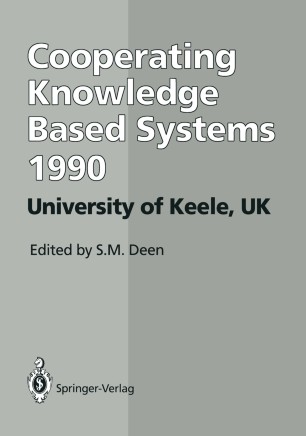 Proceedings of the International Working Conference on Cooperating Knowledge Based Systems 3–5 October 1990, University of Keele, UK

This is the first international conference aimed at bringing the distributed database and distributed AI (DAD experts together, from both academia and industry, in order to discuss the issues of the next generation of knowledge based systems, namely Cooperating Knowledge Based Systems or CKBS for short. As the area of CKBS is new, we intended it to be an ideas conference - a conference where interesting new ideas, rather than results from completed projects, are explored, discussed, and debated. The conference was organised by the DAKE Centre. This is an interdisciplinary centre at the University of Keele for research and development in Data and Knowledge Engineering (DAKE). The Centre draws most of its strength from the Department of Computer Science which also provides administrative support for the activities of the Centre, although its membership is spread over several departments. The Centre has three main streams of research activities, namely: Large Knowledge Bases Software Engineering Neural Networks The Large Knowledge Base group, which provided the focus for this conference, is active in a number of research areas relating to data and knowledge bases, spanning from distributed databases to cooperations among data and knowledge bases. The current research topics include integration of data and knowledge bases and coopera­ ting knowledge based systems, with several major projects in the latter (see the entries under the Poster Session given below).