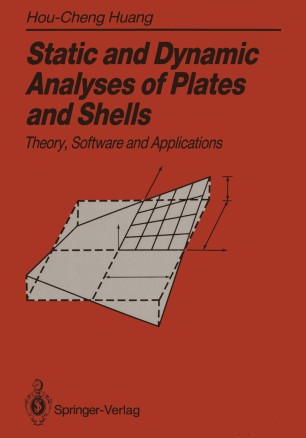 Static and Dynamic Analyses of Plates and Shells

Over the past decade or so much has been written on the various attempts to produce efficient, accurate and reliable Mindlin plate finite elements. In the late sixties, a degenerated, Mindlin-type, curved shell element was developed and subsequently many improvements in such elements have been made. Reliability and efficiency in use has always been a major objective. Degenerated shell elements have enjoyed widespread popularity despite certain potential defects, including shear and membrane lock­ ing behaviour and spurious mechanisms. After introducing the basic foundations of Mindlin-type elements, this book describes these defects and also gives the reasons for their occurrence. Furthermore, the author proposes an approach to overcome these defects. A series of linear benchmark tests are proposed to illustrate the performance of the assumed strain element formulations. The formula­ tions and applications for material non-linearity are also presented. Both isotropic and anisotropic material models are included together with the results for both static and transient dynamic analyses. Two associated programs are fully documented and provided on floppy discs with test examples. Source codes for the two associated programs are provided: one is for static analysis and the other for dynamic analysis, and the programs can be compiled and run on either a mini or mainframe coniputer via a terminal. The author hopes that this book may provide further impetus in the important research area of plate and shell element technology.