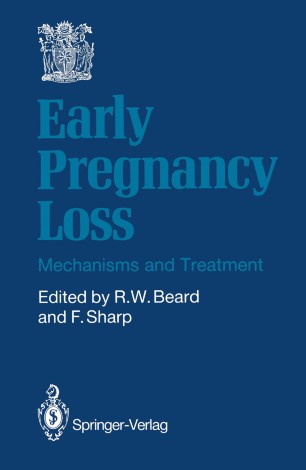 The first few months of any pregnancy are of supreme importance to the success of that pregnancy. This statement is so obvious as to be almost a platitude, yet it must be said that no aspect of pregnancy has been more neglected in the human than the first three months. Little is known of the morphological changes that occur at that time and our knowledge of the mechanisms that control this vital stage of pregnancy is almost non-existent. The explanation for this neglect of what is an obvious area for study is the difficulty of obtaining normal material. It is rare to have material to study from a healthy first trimester pregnancy and the study by Hertig and Rock!l) of early conception found by chance in hysterectomy speci­ mens must be unique. The information that we do have about early pregnancy is mostly gained from animal studies or single miscarriages in humans. Chromosomal defects are common but are not an explanation for the majority of recurrent miscarriages. Obstetricians have hypothesised many causes for this condition and have deve­ loped numerous metQods for treating it, but the studies have been poorly con­ trolled so that our understanding of the cause(s) has not advanced. Treatment of women with a history of recurrent miscarriage by paternal leuco­ cyte infusion (immunotherapy) may be yet another form of treatment that is hailed as a new advance only to be rejected when subject to rigorous testing.