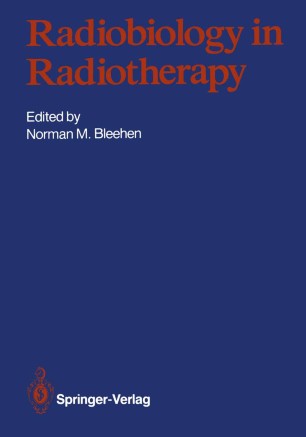 The ninth annual multidisciplinary symposium on clinical oncology organized by the Royal College of Radiologists was jointly arranged with the International Society for Radiation Oncology. It was held in London in February 1987 and discussed the biological and clinical basis of the effects of radiotherapy. Wherever possible lectures by an experimental scientist were paired with those of a clinical scientist in order to emphasize clinical relevance. It is hoped that this has resulted in a widely balanced view of the subject. The volume presents an updated version of these subjects based on those talks. After surgery, radiotherapy is the main treatment used in the management of patients with cancer. Its empirical success when first introduced is now backed up by a wealth of laboratory, clinical and experimental experience. New techniques for adminis­ tering the conventional X-ray therapy have been supplemented by methods which can be used to modify the radiation response. These include changes in dose rate or fractionation, and combined modality treatments including sensitization by drugs or heat. Other types of radiation, such as neutrons and other particles, are also now available which have enhanced physical and biological advantages.