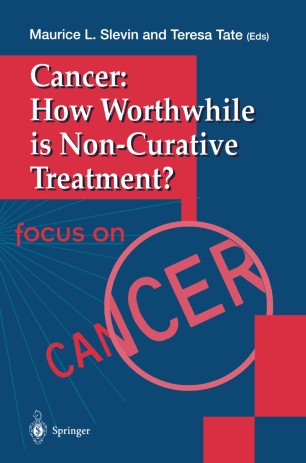 Cancer: How Worthwhile is Non-Curative Treatment?

Cancer is a major issue in the provision of health care. It is estimated that one in four people in developed countries are likely to develop it at some time. As longevity steadily increases, the incidence of malignant disease is expected to rise further. Important advances in the control of cancer have taken place and curative treatment has improved, notably in some of the rarer tumours, particularly in children. Advances in the more common cancers have been less marked, although adjunctive systemic treatment and population screening are lowering mortality from the most prevalent cance- carcinoma of the breast. Despite this progress, complete control of malignant disease is still a long way off. However, our understanding of the molecular biology of cancer has increased enormously in recent years and the application of this knowledge holds considerable promise for developing new therapeutic strategies. As for prevention, the cause of most cancers is still poorly understood although it is clear that tobacco avoidance would prevent most lung cancers and several others. Cancer is studied at many different levels: molecular and cellular biology, pathology in patients (particularly clinical trials), and prevention and populations (epidemiology). The psychosocial problems caused to patients and their families are being increasingly recognized and subjected to systematic study. Workers in the field, therefore, range from basic scientists to epidemiologists, from hospital specialists to community support teams. Each needs to have at least some knowledge of the role the others play.