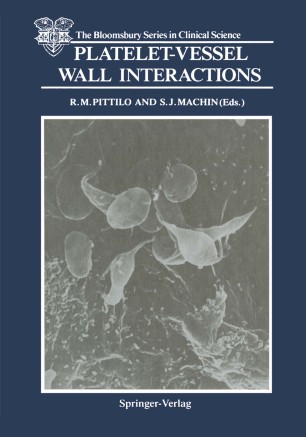 The publication of Platelet-Vessel Wall Interactions, the second monograph in the Bloomsbury Series in Clinical Science, is particu­ larly welcome as its appearance signifies the further development of the Series and its potential for the future. The theme of this monograph is the pathophysiology of atherosclerosis, a topic that symbolises the aim of the Series, namely to highlight the important interfaces between basic medical science and clinical practice. Our congratulations to the Editors and contributors. London, December 1987 lack Tinker Preface In the Western world, atherosclerosis causes more illness and death than any other disease. Despite its devastating effects, the pathogenesis of the disease remains a matter for hypothesis and con­ jecture. This monograph owes its conception to a programme of work directed towards understanding the basic pathophysiology of atherosclerosis. The circulatory system is lined by vascular endothelium which has a central role in maintaining the integrity of the vessel wall and prevent­ ing thrombosis. The natural equilibrium existing between normal en­ dothelium which supports blood flow, and platelets which serve to re­ pair damaged endothelium, is explored in the first two chapters. Atherosclerosis developing as a response to endothelial injury is one hypothesis which has stimulated widespread interest, and re­ search has largely been directed towards finding the injurious agent.