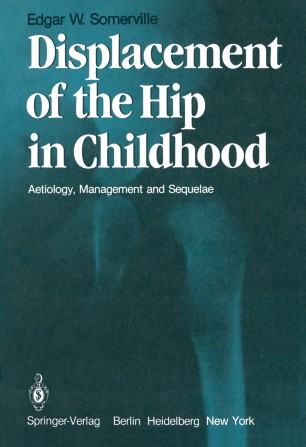 Displacement of the Hip in Childhood

This book is concerned with the effect that displacement, whether minimal or severe, may have on the hip joint. Although it is concerned with the changes which take place in childhood and during growth, when they are most common and most severe, it is also to a lesser extent concerned with the way they will continue or even start long after growth has ceased. It is based on a series of about 450 cases of congenital displacement of the hip treated when the deformity was established, together with unstable hips drawn from 82000 children whose hips were examined at the time of birth. This study was carried out at the Nuffield Orthopaedic Centre in Oxford. It was started in early 1949 by the author with Mr. J. C. Scott and continued until mid-1977, since when it has continued in the capable hands of Mr. J. W. Goodfellow and Mr. M. K. Benson. The study was started at a time when the generally accepted view was still that the displacement was part of the primary failure of development of the acetabulum, which could not adequately contain the femoral head. Conservative treatment with manipulative reduc­ tion followed by a prolonged period of plaster immobilisation was the method of choice. Few attempts had been made with surgery as a primary procedure and these had not met with continuing success.