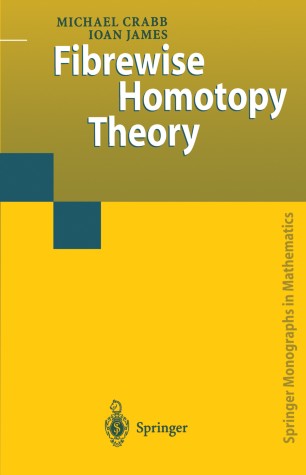 Topology occupies a central position in the mathematics of today. One of the most useful ideas to be introduced in the past sixty years is the concept of fibre bundle, which provides an appropriate framework for studying differential geometry and much else. Fibre bundles are examples of the kind of structures studied in fibrewise topology. Just as homotopy theory arises from topology, so fibrewise homotopy the­ ory arises from fibrewise topology. In this monograph we provide an overview of fibrewise homotopy theory as it stands at present. It is hoped that this may stimulate further research. The literature on the subject is already quite extensive but clearly there is a great deal more to be done. Efforts have been made to develop general theories of which ordinary homotopy theory, equivariant homotopy theory, fibrewise homotopy theory and so forth will be special cases. For example, Baues [7] and, more recently, Dwyer and Spalinski [53], have presented such general theories, derived from an earlier theory of Quillen, but none of these seem to provide quite the right framework for our purposes. We have preferred, in this monograph, to develop fibre wise homotopy theory more or less ab initio, assuming only a basic knowledge of ordinary homotopy theory, at least in the early sections, but our aim has been to keep the exposition reasonably self-contained.