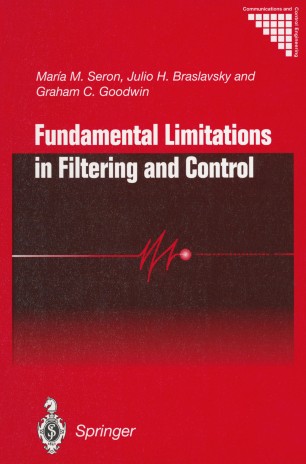 Fundamental Limitations in Filtering and Control

This book deals with the issue of fundamental limitations in filtering and control system design. This issue lies at the very heart of feedback theory since it reveals what is achievable, and conversely what is not achievable, in feedback systems. The subject has a rich history beginning with the seminal work of Bode during the 1940's and as subsequently published in his well-known book Feedback Amplifier Design (Van Nostrand, 1945). An interesting fact is that, although Bode's book is now fifty years old, it is still extensively quoted. This is supported by a science citation count which remains comparable with the best contemporary texts on control theory. Interpretations of Bode's results in the context of control system design were provided by Horowitz in the 1960's. For example, it has been shown that, for single-input single-output stable open-loop systems having rela­ tive degree greater than one, the integral of the logarithmic sensitivity with respect to frequency is zero. This result implies, among other things, that a reduction in sensitivity in one frequency band is necessarily accompa­ nied by an increase of sensitivity in other frequency bands. Although the original results were restricted to open-loop stable systems, they have been subsequently extended to open-loop unstable systems and systems having nonminimum phase zeros.