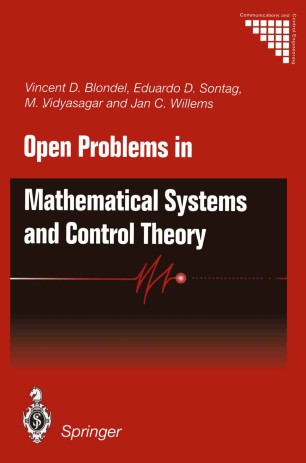 System and Control theory is one of the most exciting areas of contemporary engineering mathematics. From the analysis of Watt's steam engine governor - which enabled the Industrial Revolution - to the design of controllers for consumer items, chemical plants and modern aircraft, the area has always drawn from a broad range of tools. It has provided many challenges and possibilities for interaction between engineering and established areas of 'pure' and 'applied' mathematics. This impressive volume collects a discussion of more than fifty open problems which touch upon a variety of subfields, including: chaotic observers, nonlinear local controlability, discrete event and hybrid systems, neural network learning, matrix inequalities, Lyapunov exponents, and many other issues. Proposed and explained by leading researchers, they are offered with the intention of generating further work, as well as inspiration for many other similar problems which may naturally arise from them. With extensive references, this book will be a useful reference source - as well as an excellent addendum to the textbooks in the area.