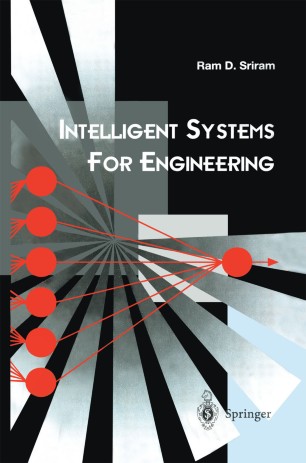 When men of knowledge impart this knowledge, I do not mean they will convince your reason. I mean they will awaken in you the faith that it is so. - Sri Krishna, Bhagavadgita BACKGROUND The use of computers has led to significant productivity increases in the en­ gineering industry. Most ofthe computer-aided engineering applications were . restricted to algorithmic computations, such as finite element programs and circuit analysis programs. However, a number ofproblems encountered in en­ gineering are not amenable to purely algorithmic solutions. These problems are often ill-structured; the term ill-structured problems is used here to de­ note problems that do not have a clearly defined algorithmic solution. An experienced engineer deals with these ill-structured problems using his/her judgment and experience. The knowledge-based systems (KBS) technology, which emerged out of research in artificial intelligence (AI), offers a method­ ologyto solve these ill-structuredengineering problems. The emergenceofthe KBS technology can be viewed as the knowledge revolution: other important events that led to increased productivity are the industrial revolution (17th century); the invention of the transistor and associated developments (first half of the 20th century); and the world-wide web (towards the end of the 20th century). Kurzweil, in a lecture at M. LT on December 3, 1987, linked the progress of automation to two industrial revolutions: the first industrial PREFACE xxxii revolution leveraged our physical capabilities, whereas the second industrial revolution - the knowledge revolution - is expected leverage oUr mental ca­ pabilities.