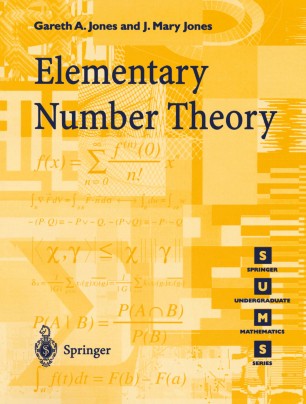 Our intention in writing this book is to give an elementary introduction to number theory which does not demand a great deal of mathematical back­ ground or maturity from the reader, and which can be read and understood with no extra assistance. Our first three chapters are based almost entirely on A-level mathematics, while the next five require little else beyond some el­ ementary group theory. It is only in the last three chapters, where we treat more advanced topics, including recent developments, that we require greater mathematical background; here we use some basic ideas which students would expect to meet in the first year or so of a typical undergraduate course in math­ ematics. Throughout the book, we have attempted to explain our arguments as fully and as clearly as possible, with plenty of worked examples and with outline solutions for all the exercises. There are several good reasons for choosing number theory as a subject. It has a long and interesting history, ranging from the earliest recorded times to the present day (see Chapter 11, for instance, on Fermat's Last Theorem), and its problems have attracted many of the greatest mathematicians; consequently the study of number theory is an excellent introduction to the development and achievements of mathematics (and, indeed, some of its failures). In particular, the explicit nature of many of its problems, concerning basic properties of inte­ gers, makes number theory a particularly suitable subject in which to present modern mathematics in elementary terms.