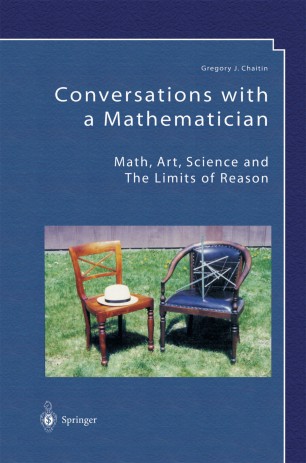 Conversations with a Mathematician

Math, Art, Science and the Limits of Reason

G. J. Chaitin is at the IBM Thomas J. Watson Research Center in New York. He has shown that God plays dice not only in quantum mechanics, but even in the foundations of mathematics, where Chaitin discovered mathematical facts that are true for no reason, that are true by accident. This book collects his most wide-ranging and non-technical lectures and interviews, and it will be of interest to anyone concerned with the philosophy of mathematics, with the similarities and differences between physics and mathematics, or with the creative process and mathematics as an art.
"Chaitin has put a scratch on the rock of eternity."
Jacob T. Schwartz, Courant Institute, New York University, USA
"(Chaitin is) one of the great ideas men of mathematics and computer science."
Marcus Chown, author of The Magic Furnace, in NEW SCIENTIST
"Finding the right formalization is a large component of the art of doing great mathematics."
John Casti, author of Mathematical Mountaintops, on Godel, Turing and Chaitin in NATURE
"What mathematicians over the centuries - from the ancients, through Pascal, Fermat, Bernoulli, and de Moivre, to Kolmogorov and Chaitin - have discovered, is that it ÄrandomnessÜ is a profoundly rich concept."
Jerrold W. Grossman in the MATHEMATICAL INTELLIGENCER