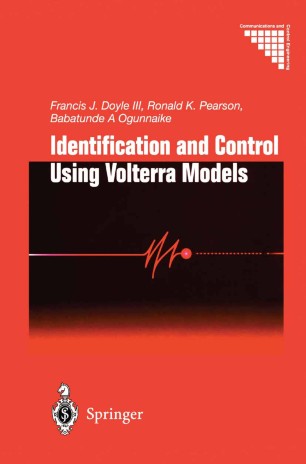 Much has been written about the general difficulty of developing the models required for model-based control of processes whose dynamics exhibit signif­ icant nonlinearity (for further discussion and references, see Chapter 1). In fact, the development ofthese models stands as a significant practical imped­ iment to widespread industrial application oftechniques like nonlinear model predictive control (NMPC), whoselinear counterpart has profoundly changed industrial practice. One ofthe reasons for this difficulty lies in the enormous variety of "nonlinear models," different classes of which can be less similar to each other than they are to the class of linear models. Consequently, it is a practical necessity to restrict consideration to one or a few specific nonlinear model classes if we are to succeed in developing, understanding, and using nonlinear models as a basis for practical control schemes. Because they repre­ sent a highly structured extension ofthe class oflinear finite impulse response (FIR) models on which industrially popular linear MPC implementations are based, this book is devoted to the class of discrete-time Volterra models and a fewother, closelyrelated, nonlinear model classes. The objective ofthis book is to provide a useful reference for researchers in the field of process control and closely related areas, collecting a reasonably wide variety of results that may be found in different parts of the large literature that exists on the gen­ eral topics of process control, nonlinear systems theory, statistical time-series models, biomedical engineering, and digital signal processing, among others.