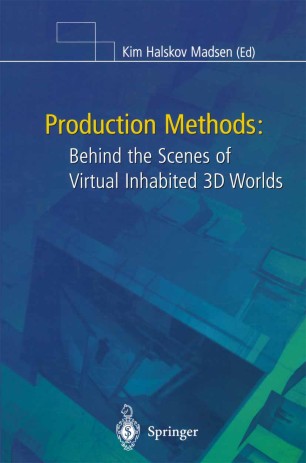 Behind the Scenes of Virtual Inhabited 3D Worlds

Kim Halskov Madsen Up until a few decades ago, business administration and science were the primary areas in which computers were applied, but terms like pervasive computing reflect that interactive computing power is becoming an embedded part of people's every­ day environment, not only office buildings and private homes but also art and cul­ At one of the frontiers of multimedia applications computers are used as tural events. part of experimental theatre, puppet theatre, musical performances, museums, entertainment, and learning. In some of these domains, people interact with the computers using a mouse, keyboard and a 17-inch monitor, but present-day inter­ faces take a variety of forms, including motion-capture technology and displays of up to several metres in height and width. The trend of applying computer technologies in the domain of art and culture has been one of the pivots of a Danish research project, Staging of Virtual Inhabited 3D Spaces. The results of the project are presented in a series of four volumes, of which this book is the last one. The three other publications are: Virtual Interaction: Interaction in Virtual Inhabited 3D Worlds; Virtual Space: The Spatiality of Virtual Inhabited 3D Worlds; and 3D Applications: Applications with Virtual Inhabited 3D Worlds.