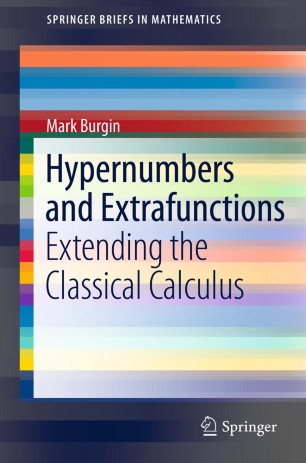 “Hypernumbers and Extrafunctions” presents a rigorous mathematical approach to operate with infinite values. First, concepts of real and complex numbers are expanded to include a new universe of numbers called hypernumbers which includes infinite quantities. This brief extends classical calculus based on real functions by introducing extrafunctions, which generalize not only the concept of a conventional function but also the concept of a distribution. Extrafucntions have been also efficiently used for a rigorous mathematical definition of the Feynman path integral, as well as for solving some problems in probability theory, which is also important for contemporary physics.

This book introduces a new theory that includes the theory of distributions as a subtheory, providing more powerful tools for mathematics and its applications. Specifically, it makes it possible to solve PDE for which it is proved that they do not have solutions  in distributions. Also illustrated in this text is how this new theory allows the differentiation and integration of any real function. This text can be used for enhancing traditional courses of calculus for undergraduates, as well as for teaching a separate course for graduate students.