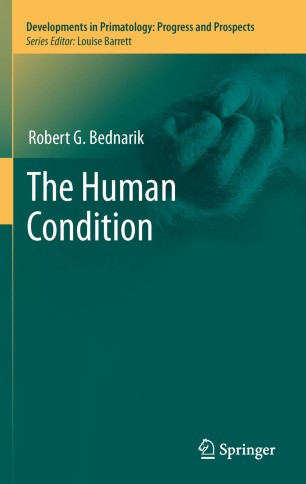 Although the human condition can also be considered in metaphysical, ideological or ontological terms, in this book it is examined from a purely scientific perspective: what has occurred in the evolution of our species that led to the emergence of such a remarkable primate? In reviewing the limited empirical evidence we have about our distant past, some favored interpretations are replaced with hitherto unexplored alternatives. The relatively recent reduction of human brain size and physical robusticity, loss of estrus, development of neoteny and of numerous deleterious or maladaptive genetic syndromes, including neurodegenerative illnesses, are all attributed to one cause: the rise of culturally mediated behavior, including deliberate mate choice based on cultural constructs. This shift, introduced roughly 40,000 years ago, replaced both natural selection and genetic drift with the laws of domestication. Homo sapiens sapiens is thus the product of his own but unintended self-domestication. This revolutionary new hypothesis solves several conundrums in paleoanthropology, neuroscience and the cognitive sciences. But in a broader perspective, it also explains how the contradictions, tensions and enigmas of human existence came into existence and can be rationally accounted for. The Human Condition, therefore, strives to explain the very origins and characteristics of what it means to be human.

Robert G. Bednarik, born in Vienna but an Australian since 1970, contradicts norms. He has undertaken numerous expeditions crossing the sea on rafts built with stone tools, but he cannot swim; he has produced 1165 academic publications, including many books, but has no formal education; he edits three scientific journals and two series of monographs, but not in his native language. As a complete autodidact, he regards himself as ignorant as did Socrates. Consequently his principal interest is the origin of the human ability to create constructs of reality, and in a wide variety of fields providing supplementary information in that quest.