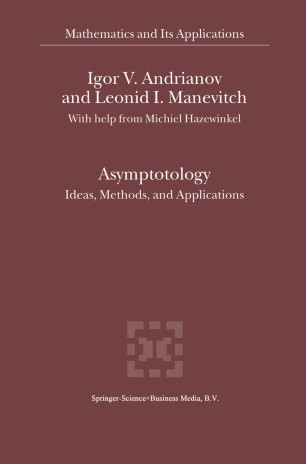 Part of the Mathematics and Its Applications book series (MAIA, volume 551)

Asymptotic methods belong to the, perhaps, most romantic area of modern mathematics. They are widely known and have been used in me­ chanics, physics and other exact sciences for many, many decades. But more than this, asymptotic ideas are found in all branches of human knowledge, indeed in all areas of life. In this broader context they have not and perhaps cannot be fully formalized. However, they are mar­ velous, they leave room for fantasy, guesses and intuition; they bring us very near to the border of the realm of art. Many books have been written and published about asymptotic meth­ ods. Most of them presume a mathematically sophisticated reader. The authors here attempt to describe asymptotic methods on a more accessi­ ble level, hoping to address a wider range of readers. They have avoided the extreme of banishing formulae entirely, as done in some popular science books that attempt to describe mathematical methods with no mathematics. This is impossible (and not wise). Rather, the authors have tried to keep the mathematics at a moderate level. At the same time, using simple examples, they think they have been able to illustrate all the key ideas of asymptotic methods and approaches, to depict in de­ tail the results of their application to various branches of knowledg- from astronomy, mechanics, and physics to biology, psychology and art. The book is supplemented by several appendices, one of which con­ tains the profound ideas of R. G.