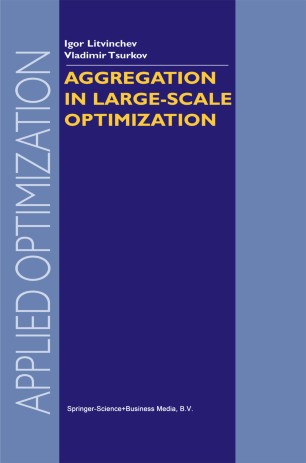 When analyzing systems with a large number of parameters, the dimen­ sion of the original system may present insurmountable difficulties for the analysis. It may then be convenient to reformulate the original system in terms of substantially fewer aggregated variables, or macrovariables. In other words, an original system with an n-dimensional vector of states is reformulated as a system with a vector of dimension much less than n. The aggregated variables are either readily defined and processed, or the aggregated system may be considered as an approximate model for the orig­ inal system. In the latter case, the operation of the original system can be exhaustively analyzed within the framework of the aggregated model, and one faces the problems of defining the rules for introducing macrovariables, specifying loss of information and accuracy, recovering original variables from aggregates, etc. We consider also in detail the so-called iterative aggregation approach. It constructs an iterative process, at· every step of which a macroproblem is solved that is simpler than the original problem because of its lower dimension. Aggregation weights are then updated, and the procedure passes to the next step. Macrovariables are commonly used in coordinating problems of hierarchical optimization.