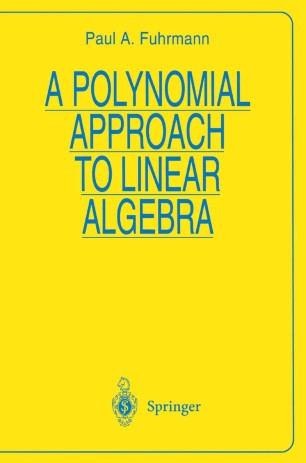 A Polynomial Approach to Linear Algebra

A Polynomial Approach to Linear Algebra is a text which is heavily biased towards functional methods. In using the shift operator as a central object, it makes linear algebra a perfect introduction to other areas of mathematics, operator theory in particular. This technique is very powerful as becomes clear from the analysis of canonical forms (Frobenius, Jordan). It should be emphasized that these functional methods are not only of great theoretical interest, but lead to computational algorithms. Quadratic forms are treated from the same perspective, with emphasis on the important examples of Bezoutian and Hankel forms. These topics are of great importance in applied areas such as signal processing, numerical linear algebra, and control theory. Stability theory and system theoretic concepts, up to realization theory, are treated as an integral part of linear algebra. Finally there is a chapter on Hankel norm approximation for the case of scalar rational functions which allows the reader to access ideas and results on the frontier of current research.