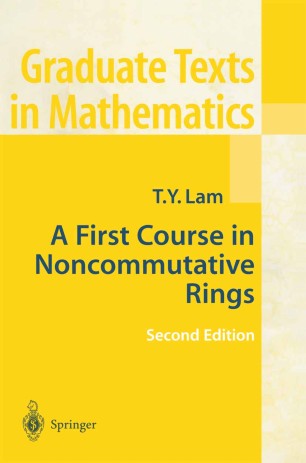 A First Course in Noncommutative Rings

A First Course in Noncommutative Rings, an outgrowth of the author's lectures at the University of California at Berkeley, is intended as a textbook for a one-semester course in basic ring theory. The material covered includes the Wedderburn-Artin theory of semisimple rings, Jacobson's theory of the radical, representation theory of groups and algebras, prime and semiprime rings, local and semilocal rings, perfect and semiperfect rings, etc. By aiming the level of writing at the novice rather than the connoisseur and by stressing th the role of examples and motivation, the author has produced a text that is suitable not only for use in a graduate course, but also for self- study in the subject by interested graduate students. More than 400 exercises testing the understanding of the general theory in the text are included in this new edition.

"Ten years ago, the first edition ... of this book appeared. It is quite rare that a book can become a classic in such a short time, but this did happen for this excellent book. Of course minor changes were made for the second edition; new exercises and an appendix on uniserial modules were added. Every part of the text was written with love and care. The explanations are very well done, useful examples help to understand the material ... ." (G. Pilz, Internationale Mathematische Nachrichten, Issue 196, 2004)

"This is the second edition of the book with the same title published in 1991. The entire text has been retyped, some proofs were rewritten, and numerous improvements in the exposition have been included. ... The original exercises in the first edition have been replaced by 400 exercises of the Problem Book published by the author in 1995 ... . As the publication ... impressively shows, the book is indeed very suitable as a text for a full-year graduate course in non-commutative ring theory." (H. Mitsch, Monatshefte für Mathematik, Vol. 136 (4), 2002)

"The book under review is the new edition of the 1st edition of this book which was published ten years ago. In the intervening period, the book has become a standard textbook for a graduate course in non commutative rings. ... All this material is beautifully covered in this book with many examples and exercises. The book is a joy to read, and must be read by all students of mathematics. It is specially welcome to have this book in softcover, relatively in-expensive, edition ... ." (Dipendra Prasad, Journal of the Indian Academy of Mathematics, Vol. 24 (1), 2002)

"This book, an outgrowth of the author’s lectures at the University of Berkeley, is intended as a textbook for a one-semester course in basic ring theory. ... More than 400 exercises testing the understanding of the general theory in the text are included in this new edition." (L’Enseignement Mathematique, Vol. 47 (3-4), 2001)

"The present book is a radical update. For the second edition the text was retyped, some proofs were rewritten and improvements in exposition have also taken place. ... It is well-written and consists of eight chapters. ... There is a very good reference section for further study and a name index consisting of four pages of closely-packed names. ... As always the standard of print and presentation by Springer is exemplary." (Brian Denton, The Mathematical Gazette, Vol. 86 (505), 2002)