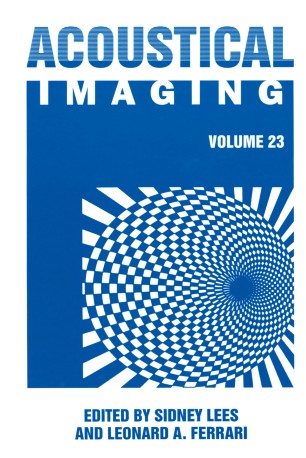 The contents of this volume are the proceedings of the 23'd International Symposium on Acoustical Imaging which took place 13-16 April, 1997, in Boston, Massachusetts. The first Symposium met 25 years ago. Originally the Symposium met in California, then elsewhere within the United States but beginning in 1988 the Symposia began to meet outside of the United States as welL It is now being held about every eighteen months, alternately in the United States and then outside. The present pattern is to hold one meeting in East Asia, then in the USA, then in Europe and again in the USA However, for scheduling reasons the next Symposium will be in Santa Barbara, California, followed by England and then East Asia. It is to be noted that the Symposium is a free standing institution, not associated with any other organization. Each meeting is the total responsibility of its chairman with the advice of past chairmen. Papers are submitted in response to the call for them and reviewed by an International Scientific Advisory Board . . The quality depends entirely on the response to the calL It is gratifYing to note that the Symposium has attained the status that attracts high quality contributions despite (or perhaps because ot) the loose structure. Two factors that have appeal are that there is only one session and that there is time during the meeting for extensive discussion.