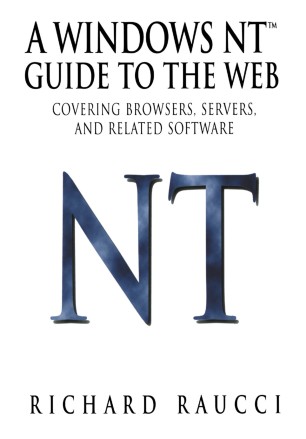 A Windows NT™ Guide to the Web

NT as an Operating System Microsoft developed Windows NT as an alternative to Unix. The company sees it as a part of its overall Enterprise Computing plan.It scales up from basic 486 systems to high-end RISC sys­ tems from companies like Digital, NEC,and PCvendors offering PowerPC systems for NT. The basic operating system consists of a user interface shell (similar in appearance to Windows 3.1 for NT 3.1 to 3.5, and changing to look and feel more like Windows 95 for NT 4.0) de­ signed to run 32-bit programs. This makes it ideal for the multi­ media nature of Web browsers, and for the heavy-duty require­ ments of a Web server. There are a number of elements in the as that are special to NT. These include the control panelsand administrativesupport tools relating to NT's services and support mechanisms. TCP/IP is included for Internetaccess throughtraditional networks.You can also connect from Windows NTWorkstation via MS Remote Access to any Internet Access Providersupporting PPP. Basic requirements for Windows NT Workstation are a 486 system with at least 8 MB of RAM, although 16 MB is recom­ mended. The client software needed to connect to a corporate server is included, as is the Remote Access software mentioned earlier. 1. Introduction FIGURE 1.1. NT4.0 operating system.