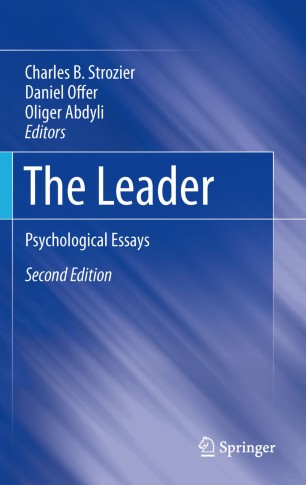 Behind every leader is an instructive life story. It often promotes a public image that inspires others to live by it. And, sometimes, even to live or to die for it. As leadership qualities and image issues gain significance in the public discourse, the psychological study of leadership is a critical factor in any discussion. With its trenchant insights into leaders past and present, The Leader: Psychological Essays, Second Edition, updates a pioneering text in this field and provides a solid basis for ongoing dialogue on this important subject.

Within the context of the ever-evolving disciplines of psychoanalysis and psychodynamics, this thought-provoking volume examines the lives of several prominent leaders from ancient Greece through the start of the 21st century. The authors explore how these leaders imposed their individual missions and mystiques on others, thereby fulfilling – and, sometimes, creating – distinct needs in their followers.  The volume brings into vivid focus issues with the potential for devastating consequences on the global stage.

A study of paranoid leadership and its implications for future politics and policy.

This must-have Second Edition is indispensable reading for researchers, professors, and graduate students across many disciplines, including political psychology, psychoanalysis, history and political science, psychiatry, anthropology, and personality and social psychology. It is important reading for anyone with an interest in the life stories of leaders past and present and how they affect our world even long after they are gone.

Charles B. Strozier has a Harvard B.A., an M.A. and a PhD from the University of Chicago, and has training as a research candidate at the Chicago Institute for Psychoanalysis and clinical psychoanalytic training at TRISP in New York City.  He is a Professor of History and the founding Director of the Center on Terrorism, John Jay College, City University of New York, and a practicing psychoanalyst in New York City.  Strozier’s most recent book, edited with several colleagues, is The Fundamentalist Mindset: Psychological Perspectives on Religion, Violence, and History (Oxford, 2010), and in 2011 has forthcoming his interview study, Until The Fires Stopped Burning: 9/11 and New York City.  His earlier books include a prize-winning psychological study of Abraham Lincoln (Lincoln’s Quest for Union:  A Psychological Portrait, 1982, revised edition in paper 2001, and Heinz Kohut:  The Making of a Psychoanalyst (2001), which won the Gradiva Award from the National Association for the Advancement of Psychoanalysis, the Goethe Prize from the Canadian Psychoanalytic Association, and was nominated for a Pulitzer Prize.  He is also the author of Apocalypse:  On the Psychology of Fundamentalism in America (1994, new edition 2002) and has edited, with Michael Flynn, Trauma and Self (1996), Genocide, War, and Human Survival (1996), and The Year 2000 (1997).  Strozier was the founding editor (until 1986) of The Psychohistory Review and has published scores of articles and book chapters on aspects of history and psychoanalysis.

Daniel Offer, M.D., received his B.S. from the University of Rochester and his M.D. from the University of Chicago.  He interned at the University of Illinois's Research and Educational Hospital. He received his psychiatric training at Michael Reese Hospital and Medical Center, Chicago, Illinois.  He is also a graduate of the Chicago Institute for Psychoanalysis.  Offer is currently Professor  Emeritus of Psychiatry and Behavioral Sciences at the Feinberg School of Medicine of Northwestern University. He has spent his whole career in academic psychiatry. He has published 17 books and had written more than 200 articles. He also developed an original psychological test (The Offer Self-Image Questionnaire) which has been translated into 26 languages. Offer was a fellow at The Center for Advanced Studies in the Behavioral Sciences at Stanford University, 1973-1974. He was the founding editor of and served as editor-in-chief for 35 years of Springer's Journal of Youth and Adolescence.

Oliger Abdyli, holds a MA in Public Administration, Inspector General Track—International Inspection and Oversight and a BA in Government—Political Science from John Jay College. He is also the recipient of the Certificate in Terrorism Studies offered by the Center on Terrorism.  In the near future, Mr. Abdyli intends to pursue a PhD in Political Science.  His research interests include politically motivated terrorism and state response to terrorist activities, political utilization of fear and paranoia to induce groupthink and social compliance, as well as corruption and larger governance issues.