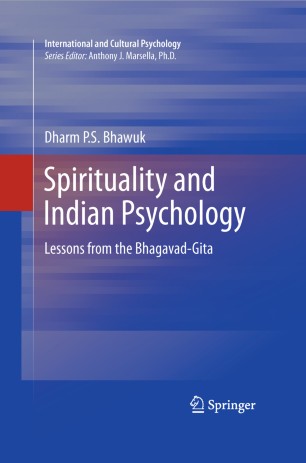 Lessons from the Bhagavad-Gita

In recent years, globalization, multiculturalism, and Western interest in Eastern thought have contributed to the growth of cross-cultural psychology. Paradoxically, however, while spirituality plays such a major role in non-Western cultures, it tends to occupy only a minor area of cross-cultural research.

Its roots in ancient philosophical texts such as the Bhagavad-Gita make Indian psychology not only an especially rich tradition and one deserving of close study, but also a template for how Western researchers can better understand indigenous spiritual perspectives. From this vantage point, Spirituality and Indian Psychology: Lessons from the Bhagavad-Gita provides accessible models for this understanding, from issues on the individual level (cognition, behavior, emotions, the self) to larger concerns such as intergroup relations and world peace, rarely-encountered concepts of work, bondage/liberation, and desire as well as the more familiar karma and dharma. In addressing the question of whether universals exist in psychology, this thought-provoking book:

Cross-cultural psychologists, sociologists, researchers in Indian psychology and culture—anyone involved in the continuing dialogue across the psychologies of the world and advancing the indigenous research agenda will find Spirituality and Indian Psychology a volume of rare interest and insight.

Indigenous Psychology model of self multiculturalism