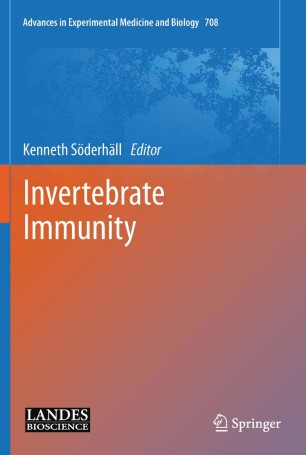 Part of the Advances in Experimental Medicine and Biology book series (AEMB, volume 708)

It can be seen that the insects are the still attracting most research and researchers. However, an increasing interest is emerging to study new invertebrate groups, especially those where the genome is known. Even though Drosophila has been and still is an excellent model for immune studies, it is now clear that there are great differences between immune responses in Drosophila and that of several other invertebrates, which indeed calls for more research on other invertebrates

Keneth Söderhäll studied at Uppsala University and obtained his MSc degree in 1972 and PhD in 1978. He was promoted to associate professor (Docent) in 1980. After receiveing his PhD he worked in many different laboratories as a post‑doc or as a guest scientist at the University of Montpellier/St.Christol, the Medical Cell Biology department at Tromsö University, the Millport Marine Biological Station in Scotland, University College of Wales in Swansea, the Marine Biological Laboratory at Woods Hole and John Hopkins University. In 1986 he held a Royal Society Fellowship at Swansea. In collaboration with Valerie J. Smith, he developed a new method to isolate and separate blood cells from invertebrates,which was based on using an anticoagulant with a low pH and EDTA , a method now used to isolate most invertebrate blood cells. When he returned to Uppsala he took a position as a researcher at the Swedish Science Research Council in 1987, obtaining a chair and appointment to professor and head of department at Uppsala University in 1989. He continued with research mainly on the proPO‑system in arthropods. His group was first to clone proPO from an invertebrate and he has worked with this so‑called melanization reaction for several years. His research team has also deciphered the clotting reaction in crustaceans and shown that it consists of a clotting protein present in plasma and a clotting enzyme, a transglutaminase present in the blood cells. This clotting system is distinct from that of a horseshoe crabs’ in which a proteinase cascade demonstrates the great diversity in immune processes in invertebrates. He has published 230 original papers and 65 reviews in journals and books, and he has edited 4 books. He is presently on the editorial board on Fish and Shellfish Immunology, and is the editor of Journal of Experimental Biology. Dr. Söderhäll previously served on Journal Experimental Zoology, Animal Biology, Journal of Invertebrate Pathology and Developmental and Comparative Immunology. Since 2000 he has coedited the journal Developmental and Comparative Immunology and beginning in 2009 he is editor‑in‑chief for this journal. He was president for the International Society of Developmental and Comparative Immunology from 2006‑2009. Currently he heads the Department of Comparative Physiology at Uppsala University (http://www.fu.uu.se/jamfys/is.html).