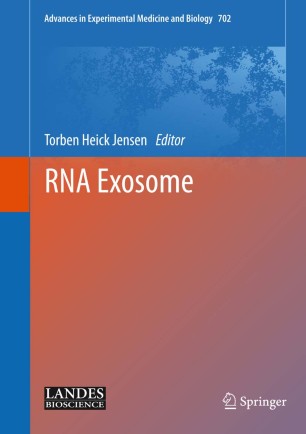 Part of the Advances in Experimental Medicine and Biology book series (AEMB, volume 702)

The diversity of RNAs inside living cells is amazing. We have known of the more “classic” RNA species: mRNA, tRNA, rRNA, snRNA and snoRNA for some time now, but in a steady stream new types of molecules are being described as it is becoming clear that most of the genomic information of cells ends up in RNA. To deal with the enormous load of resulting RNA processing and degradation reactions, cells need adequate and efficient molecular machines. The RNA exosome is arising as a major facilitator to this effect. Structural and functional data gathered over the last decade have illustrated the biochemical importance of this multimeric complex and its many co-factors, revealing its enormous regulatory power. By gathering some of the most prominent researchers in the exosome field, it is the aim of this volume to introduce this fascinating protein complex as well as to give a timely and rich account of its many functions. The exosome was discovered more than a decade ago by Phil Mitchell and David Tollervey by its ability to trim the 3’end of yeast, S. cerevisiae, 5. 8S rRNA. In a historic account they laid out the events surrounding this identification and the subsequent birth of the research field. In the chapter by Kurt Januszyk and Christopher Lima the structural organization of eukaryotic exosomes and their evolutionary counterparts in bacteria and archaea are discussed in large part through presentation of structures.

TORBEN HEICK JENSEN is a Professor at the Department of Molecular Biology at Aarhus University, Denmark. He is directing the Centre for mRNP Biogenesis and Metabolism established by the Danish National Research Foundation and employing a total of ~30 RNA researchers at all levels. Main research interests include the coupling between transcription and RNA biogenesis, quality control of RNA and the occurrence and potential function of pervasive transcription of eukaryotic genomes.