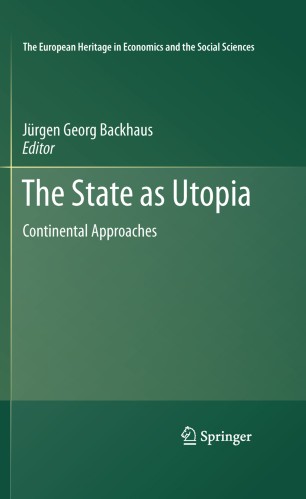 The State as Utopia

Part of the The European Heritage in Economics and the Social Sciences book series (EHES, volume 9)

This book examines utopias in classical political economy and is based on the papers presented by leading scholars at the 22nd Heilbronn Symposium in the Economics and the Social Sciences. The book focuses on the tension between the State and utopia (the State as utopia vs. utopia instead of a state). The contributors also study the question of whether seafaring and landlocked states visualize the commonwealth differently and develop different utopias, and it is concluded they do not. The volume therefore follows the refutation of the Schumpeterian Hypothesis that more concentrated industries stimulate innovation. Though the hypothesis is refuted it still remains important, the chapters argue, because it charts out an entire research program, serves as a benchmark of definite public and private sector boundaries, and defines the grammar of discourse for constitutional economic policy in OECD states. These themes are explored in detail through contributions by economists, philosophers, and social historians. The contributors examine utopias hitherto never or rarely reviewed in the English language, making this book of interest to students and scholars in economics, political science and the history of economic thought.