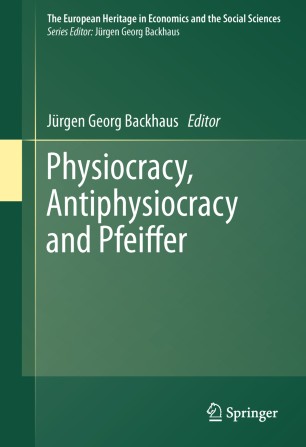 Part of the The European Heritage in Economics and the Social Sciences book series (EHES, volume 10)

Physiocracy, or the economic theory that a nation’s wealth comes from is agricultural and land development, was a popular school of thought in France in the 18th century. It was short-lived and it did not take long for the counter position, called Antiphysiocracy, to succeed it. Antiphysiokrat (1780) by Johann Friederich (von) Pfeiffer (1718-1787) greatly reduced the impact of the movement in Germany. However, Physiocracy did have some long-term effects, which are especially very relevant today and worthy of closer examination. The movement also has gained renewed interest in recent years because of the emphasis on land and the environment. The main consequence of Physiocracy was the development of forestry—the maintenance of forests to ensure sustainability—which would become the first of the applied environmental sciences. The other lasting point of Physiocracy is the idea of a single tax on land—made popular by Henry George in the late 19th century—while Antiphysiocracy has left us with a manifold and complex tax system. The contribution and significance of the Physiocrats and Antiphysiocrats are explored in detail through chapter contributions by economists, philosophers, and social historians. For example, Erik Reinert examines the topic of protective measures and puts it in a broader context in his chapter, which also includes several figures on technological dynamics. This topic is carried further by Sophus Reinert of Cambridge University, who focuses on economic espionage at the time. Enrico Schöbel and Hans Frambach look at the economic policy side of Physiocracy with respect to taxation. Kenneth Carpenter at Harvard shows that it was not the Bible that was the mostly widespread literature in the nineteenth century, as one might expect, but the Pfeiffer-type publications that shaped the knowledge economy. The book concludes that neither the Physiocrats, nor the Antiphysiocrats were pure profit maximizers and that they all had the well-being of the commonwealth in mind. It brings to light previous studies only conducted in German and is the first analysis of Pfeiffer in a century, making the book of interest to any student or scholar of political economy and the history of economic thought.

Jürgen G. Backhaus (*1950), JSD 1976, PhD (Econ) 1985, holds the Krupp Chair in Public Finance and Fiscal Sociology at Erfurt University since November 2000. Between 1986 and 2000, he has held the chair in Public Economics at Maastricht University. In September 2004 he was awarded an honorary doctorate by the University of Thessaly (Greece). He has published 60 books and monographs, about 200 articles in refereed journals and book chapters, 28 scholarly notes and 63 reviews. His research interests span economics, but also neighbouring disciplines such as law, fiscal sociology and environmental sciences. In 1994 he founded (with Frank H. Stephen) the European Journal of Law and Economics, of which he is the managing editor.