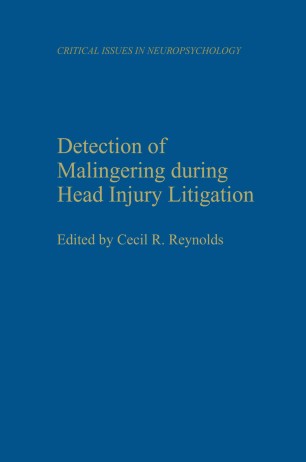 Neuropsychologists and forensic psychologists have long lacked a systematic, scientific means of assessing head injury cases, of distinguishing those plaintiffs whose pain and suffering is real and deserves just compensation from those who are simply faking it. Cecil R. Reynolds and his expert contributors provide the first definitive work on this subject, focusing on problems that beset clinicians who are called upon to evaluate head injuries in civil courts. They describe the major malingering detection techniques currently in use.

Cecil R. Reynolds, PhD, ABPN, earned his Doctoral Degree from the University of Georgia in 1978 under the tutelage of Dr. Alan S. Kaufman, with a major in School Psychology and minors in Statistics and in Clinical Neuropsychology. He served an internship divided between the Medical College of Georgia (Pediatric Neurology section and Neurological Surgery section) and the Rutland Center for Severely Emotional Disturbed Children. Prior to joining the Texas A & M University faculty in 1981, Dr. Reynolds was a faculty member at the University of Nebraska-Lincoln, where he served as Associate Director and Acting Director of the Buros Institute of Mental Measurement, after writing the grants and proposals to move the Institute to Nebraska following the death of its founder, Oscar Buros. His primary research interests are in all aspects of psychological assessment with particular emphasis on assessment of memory, emotional and affective states and traits, and issues of cultural bias in testing. He is the author of more than 300 scholarly publications and author or editor of 39 books, as well as several widely used tests of personality and behavior. He maintained a clinical practice treating trauma victims and individuals with traumatic brain injury for 25 years before retiring from clinical work at the end of 2003.

`In summary, Dr. Reynolds's latest book provides a readable and even practical treatise on the detection of malingering. Apart from being an invaluable tool for the forensic neuropsychologist, the principles outlined in the book are representative of good standard practice for understanding patient data, in or out of a forensic context. Choices in chapter themes and authors maintain diversity without straying from the main topics. ... the book is highly recommended for its informational content, clear cogent writing, and superb utility to forensic neuropsychologists. As a textbook or a general clinical resource, the book is an essential contribution to the field.'
Journal of Forensic Neuropsychology, 1 (1999)
Buy options