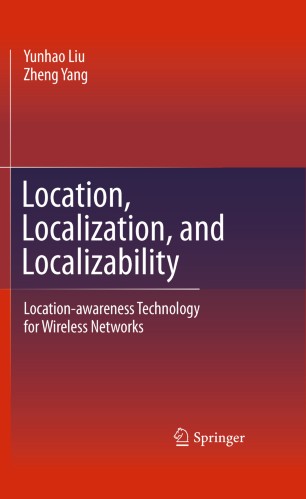 Title: Location, Localization, Localizability Authors: Yunhao Liu Zheng Yang With the popularity of wireless networks, location-based service has become increasingly prevalent in our lives, and its applications range far and wide. For instance, E-911 in the United States, or corresponding E-112 in Europe, offers timely and accurate assistance to the emergency callers by locating them through mobile communications networks or GPS, and sensor network, a typical type of wireless ad-hoc networks, has shown great potential in environmental monitoring, industrial sensing, battlefield surveillance and more. Location, Localization, Localizability provides a comprehensive and in-depth look at location-awareness technology in today’s popular wireless networks, but it does so in a way that is aware of the difficulty of organizing such information, given the obvious diversity of relevant networks. Therefore, from the perspective of application, the book focuses on wireless ad-hoc and sensor networks, in which the overwhelming majority of localization techniques are involved. It discusses a versatile array of techniques but also mentions other types of networks, such as WLAN and 3G mobile. In addition, this book is organized around three step-by-step themes: location, localization, and localizability. It first addresses location-based applications because those are closest to our daily lives. It then details localization approaches in-depth before covering other advanced topics such as localizability and location privacy. Aimed at technicians and practitioners in the industry of Real-Time Location Systems, this guidebook covers many localization algorithms in-depth while making their design and analysis accessible. Each chapter ends with a summary or comparative study, providing a bigger picture and facilitating understanding.

Yunhao Liu received his BS degree in Automation Department from Tsinghua University, China, in 1995, and an MA degree in Beijing Foreign Studies University, China, in 1997, and an MS and a Ph.D. degree in Computer Science and Engineering at Michigan State University in 2003 and 2004, respectively. He is a member of Tsinghua National Lab for Information Science and Technology, and the Director of Tsinghua MOE Key Lab for Information Security. He is also a faculty at the Department of Computer Science and Engineering, the Hong Kong University of Science and Technology. He serves as Associate Editor of IEEE Transactions on Parallel and Distributed Systems and IEEE Transactions on Mobile Computing. He also serves as General Vice Chair of WWW 2008, area chair of ICDCS 2010, and PC member of a lot of top conferences such as MobiCom, INFOCOM, MOBIHOC, etc. Yunhao and his research group are awarded Best Paper Award or Best Paper Candidate in many conferences like PerCom 2007, MobiCom 2008, ICPADS 2009, and etc. He and his Phd student Li Mo won the Grand Prize of Hong Kong Best Innovation and Research Award in 2008. He is also the Vice Chair of ACM China Council. Zheng Yang received a Bachelor of Engineering degree in computer science from Tsinghua University in 2006 and a Ph.D. degree from Hong Kong University of Science and Technology (HKUST) in 2010. His main research interests include wireless ad-hoc/sensor networks and pervasive computing. He has worked on location-based services for over 4 years and published a number of research papers in prestigious journals and conferences, including IEEE/ACM Transactions on Networking (ToN), IEEE Transactions on Parallel and Distributed Systems (TPDS), IEEE INFOCOM, IEEE ICDCS, IEEE RTSS, ACM SenSys, etc. He is a member of the IEEE and the ACM.