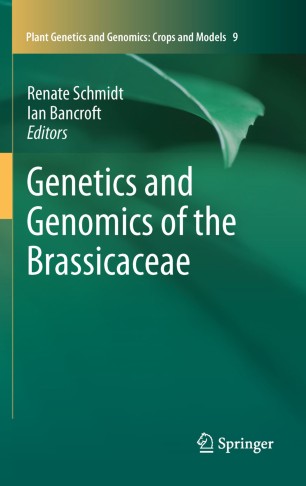 Genetics and Genomics of the Brassicaceae

The Genetics and Genomics of the Brassicaceae provides a review of this important family (commonly termed the mustard family, or Cruciferae). The family contains several cultivated species, including radish, rocket, watercress, wasabi and horseradish, in addition to the vegetable and oil crops of the Brassica genus. There are numerous further species with great potential for exploitation in 21st century agriculture, particularly as sources of bioactive chemicals. These opportunities are reviewed, in the context of the Brassicaceae in agriculture. More detailed descriptions are provided of the genetics of the cultivated Brassica crops, including both the species producing most of the brassica vegetable crops (B. rapa and B. oleracea) and the principal species producing oilseed crops (B. napus and B. juncea). The Brassicaceae also include important “model” plant species. Most prominent is Arabidopsis thaliana, the first plant species to have its genome sequenced. Natural genetic variation is reviewed for A. thaliana, as are the genetics of the closely related A. lyrata and of the genus Capsella. Self incompatibility is widespread in the Brassicaceae, and this subject is reviewed. Interest arising from both the commercial value of crop species of the Brassicaceae and the importance of Arabidopsis thaliana as a model species, has led to the development of numerous resources to support research. These are reviewed, including germplasm and genomic library resources, and resources for reverse genetics, metabolomics, bioinformatics and transformation. Molecular studies of the genomes of species of the Brassicaceae revealed extensive genome duplication, indicative of multiple polyploidy events during evolution. In some species, such as Brassica napus, there is evidence of multiple rounds of polyploidy during its relatively recent evolution, thus the Brassicaceae represent an excellent model system for the study of the impacts of polyploidy and the subsequent process of diploidisation, whereby the genome stabilises. Sequence-level characterization of the genomes of Arabidopsis thaliana and Brassica rapa are presented, along with summaries of comparative studies conducted at both linkage map and sequence level, and analysis of the structural and functional evolution of resynthesised polyploids, along with a description of the phylogeny and karyotype evolution of the Brassicaceae. Finally, some perspectives of the editors are presented. These focus upon the Brassicaceae species as models for studying genome evolution following polyploidy, the impact of advances in genome sequencing technology, prospects for future transcriptome analysis and upcoming model systems. Professor Ian Bancroft completed his PhD at the University of Lancaster in 1986 and conducted his early postdoctoral research at Michigan State University, studying the genomes of cyanobacteria. He moved to the John Innes Centre in 1989 and has been expanding and applying his genomics expertise, initially in Arabidopsis thaliana, and since 1998 in the cultivated Brassica species. Renate Schmidt is leader of the group “Genome plasticity” at the Leibniz Institute of Plant Genetics and Crop Plant Research (IPK) in Gatersleben (Germany). She was educated as a molecular geneticist, and her research interests center on comparative genome analysis in the Brassicaceae and transgene expression in plants.