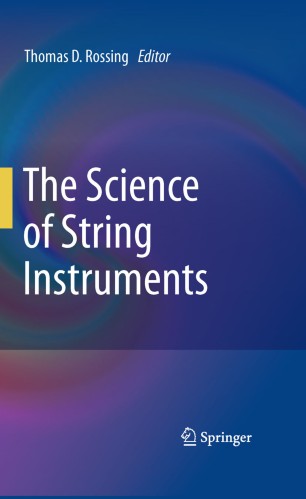 The Science of String Instruments

Many performing musicians, as well as instrument builders, are coming to realize the importance of understanding the science of musical instruments. This book explains how string instruments produce sound. It presents basic ideas in simple language, and it also translates some more sophisticated ideas in non-technical language. It should be of interest to performers, researchers, and instrument makers alike.

Tom Rossing has taught musical acoustics for nearly 50 years, and has been active in research in this area for at least 30 years. In 1992 he was awarded the Silver Medal in Musical Acoustics by the Acoustical Society of America, and his biography is included in The New Grove Dictionary of Music and Musicians. He is also the editor of the 2006 Springer Handbook of Acoustics. In 2009 he was awarded the ASA Gold Medal by the Acoustical Society of America for contributions to musical acoustics, leadership in science education, and service to the Society.