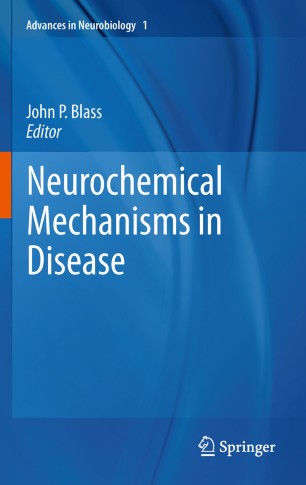 Part of the Advances in Neurobiology book series (NEUROBIOL, volume 1)

This volume of Advances in Neurobiology deals with the Neurochemistry of disease, with chapters covering both human diseases and animal “model” disorders. Specific diseases are covered in chapters on neurodegenerations such as Alzheimer’s and Parkinson's, on demyelinating diseases, on autism, and so on. This volume on Neurochemical Mechanisms in Disease strives to encourage more chemically based definitions of these and other diseases.

John P Blass, MD, PhD, has been studying the chemistry of diseases of the brain for over half a century: as an undergraduate at Harvard, as a graduate student with Henry McIlwain, as a postdoctoral fellow first with Heinrich Waelsch and then with Daniel Steinberg, during eight years at the Mental Retardation Center at UCLA, and since 1978 as Burke Professor of Neurology, Neuroscience, and Medicine at Weill Cornell Medical College in New York City (now professor emeritus). His work has concentrated on the role of reductions in brain metabolism in Alzheimer’s disease and other disorders impairing cognition.