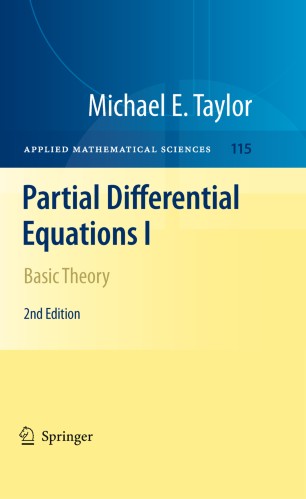 The first of three volumes on partial differential equations, this one introduces basic examples arising in continuum mechanics, electromagnetism, complex analysis and other areas, and develops a number of tools for their solution, in particular Fourier analysis, distribution theory, and Sobolev spaces. These tools are then applied to the treatment of basic problems in linear PDE, including the Laplace equation, heat equation, and wave equation, as well as more general elliptic, parabolic, and hyperbolic equations. The book is targeted at graduate students in mathematics and at professional mathematicians with an interest in partial differential equations, mathematical physics, differential geometry, harmonic analysis, and complex analysis.In this second edition, there are seven new sections including Sobolev spaces on rough domains, boundary layer phenomena for the heat equation, the space of pseudodifferential operators of harmonic oscillator type, and an index formula for elliptic systems of such operators. In addition, several other sections have been substantially rewritten, and numerous others polished to reflect insights obtained through the use of these books over time. Michael E. Taylor is a Professor of Mathematics at the University of North Carolina, Chapel Hill, NC. Review of first edition: “These volumes will be read by several generations of readers eager to learn the modern theory of partial differential equations of mathematical physics and the analysis in which this theory is rooted.”(SIAM Review, June 1998)

Michael E. Taylor is a Professor at North Carolina University in the Department of Mathematics.

“These volumes will be read by several generations of readers eager to learn the modern theory of partial differential equations of mathematical physics and the analysis in which this theory is rooted.” (SIAM Review, June 1998)

“This substantial three-volume work is an upgraded version of the comprehensive qualitative analysis of partial differential equations presented in the earlier edition. … Graduate students … will find these three volumes to be not just a fine and rigorous treatment of the subject, but also a source of inspiration to apply their knowledge and ability to the solution of other challenging problems in the field of partial differential equations. … an excellent text for all devotees of the charming and thought-provoking byways of higher mathematics.” (Christian Constanda, The Mathematical Association of America, June, 2011)