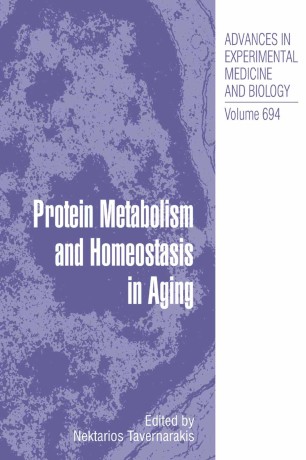 Protein Metabolism and Homeostasis in Aging

Part of the Advances in Experimental Medicine and Biology book series (AEMB, volume 694)

Aging is loosely defined as the accumulation of changes in an organism over time. At the cellular level such changes are distinct and multidimensional: DNA replication ceases, cells stop dividing, they become senescent and eventually die. DNA metabolism and chromosomal maintenance, together with protein metabolism are critical in the aging process. The focus of this book is on the role of protein metabolism and homeostasis in aging. An overview is provided of the current knowledge in the area, including protein synthesis, accuracy and repair, post-translational modifications, degradation and turnover, and how they define and influence aging. The chapters mainly focus on well-characterised factors and pathways, but new areas are also presented, where associations with aging are just being elucidated by current experimental data. Protein turnover, the balance between protein synthesis and protein degradation are carefully maintained in healthy cells. Chapters 1 and 2 illustrate that aging cells are characterised by alterations in the rate, level and accuracy of protein synthesis compared to young ones, and that mRNA translation, essential for cell growth and survival, is controlled at multiple levels. The theory that growth and somatic maintenance are believed to be antagonistic processes is described in Chapter 3: inhibition of protein synthesis results in decreased rates of growth and development, but also confers an extension of lifespan, as shown for example by the effects of dietary restriction in various models organisms.

Nektarios Tavernarakis is a Research Director (Professor) at the Institute of Molecular Biology and Biotechnology, in Heraklion, Crete, Greece, heading the Caenorhabditis elegans molecular genetics laboratory. He earned his PhD degree at the University of Crete, studying gene expression regulation in yeast, and trained in C. elegans genetics and molecular biology at Rutgers University, New Jersey, USA. His research focuses on studies of neuronal function and dysfunction, using the nematode Caenorhabditis elegans as a model organism. His main interests are the molecular mechanisms of necrotic cell death in neurodegeneration and senescent decline, the molecular mechanisms of sensory transduction and integration by the nervous system, the interplay between cellular metabolism and aging, and the development of novel genetic tools for C. elegans research. He is the recipient of a European Research Council (ERC ) Advanced Investigator grant award, a European Molecular Biology Organisation (EMBO) Young Investigator award, an International Human Frontier in Science Program Organization (HF SPO) long‑term award, the Bodossaki Foundation Scientific Prize for Medicine and Biology, the Alexander von Humboldt Foundation, Friedrich Wilhelm Bessel research award, and is member of EMBO.