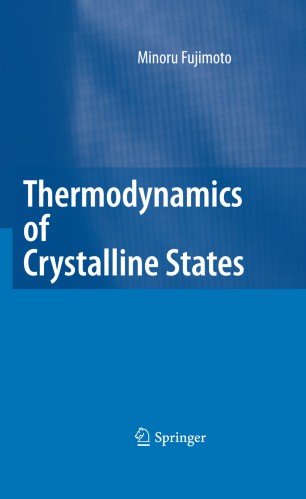 Thermodynamics is a well-established discipline of physics for properties of matter in thermal equilibrium surroundings. Applying to crystals, however, the laws encounter undefined properties of crystal lattices, which therefore need to be determined for a clear and well-defined description of crystalline states. Thermodynamics of Crystalline States explores the roles played by order variables and dynamic lattices in crystals in a wholly new way.

This book is divided into three parts. The book begins by clarifying basic concepts for stable crystals. Next, binary phase transitions are discussed to study collective motion of order variables, as described mostly as classical phenomena. In the third part, the multi-electron system is discussed theoretically, as a quantum-mechanical example, for the superconducting state in metallic crystals. Throughout the book, the role played by the lattice is emphasized and examined in-depth.

Thermodynamics of Crystalline States is an introductory treatise and textbook on mesoscopic phenomena in solid states, constituting a basic subject in condensed matter physics. While this book serves as an invaluable guide for advanced students in physics and engineering, it can also be useful as a reference for all professionals in related fields.