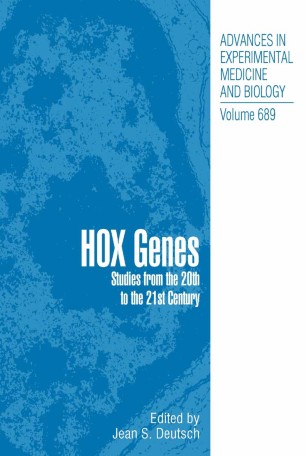 Studies from the 20th to the 21st Century

Part of the Advances in Experimental Medicine and Biology book series (AEMB, volume 689)

In his 1894 book, Materials for the Study of Variation, William Bateson coined the term Homoeosis with the following prose: The case of the modification of the antenna of an insect into a foot, of the eye of a Crustacean into an antenna, of a petal into a stamen, and the like, are examples of the same kind. It is desirable and indeed necessary that such Variations, which consist in the assumption by one member of a Meristic series, of the form or characters proper to other members of the series, should be recognized as constituting a distinct group of phenomena. ...I therefore propose...the term HOMOEOSIS...; for the essential phenomenon is not that there has merely been a change, but that something has been changed into the likeness of something else. The book was intended as a listing of the kinds of naturally occurring variation that could act as a substrate for the evolutionary process and Bateson took his examples from collections, both private and in museums, of materials displaying morphological oddities. Interestingly the person who also coined the term “Genetics” proffered little in the way of speculation on the possible genetic underpinnings of these oddities. It wasn’t until the early part of the next century that these changes in meristic series were shown to be heritable.

JEAN S. DEUT SCH, is Emeritus Professor of Genetics and Animal Biology, Université Pierre et Marie Curie, Paris 6, Department (UMR 7622) “Biologie du Développement”. Under the supervision of Prof. P.P. Slonimski, he participated to the birth of mitochondrial genetics of the yeast Saccharomyces cerevisiae. During the ‘80s, he moved to the Institut Jacques Monod in Paris to study developmental genetics of Drosophila melanogaster, focusing on the genetics of the hormonal control of metamorphosis. In 1993, he was the first in France, together with André Adoutte, to undertake evo-devo studies, choosing the cirripedes, which have been Darwin’s favourite animals, as a model, because of their so peculiar body plan. In a second step, his team studied the developmental genetics of other arthropods, including scorpions and pycnogonids. He is author of a number of scientific publications in international journals, and of three textbooks in French on Drosophila and genetics.